Hooray – I finished a dress for the summer just as a storm hit the UK. Doh, never mind. It was always going to be a little stepping stone of a dress in any case. But tis finished and I am fairly happy with it.

This is the Anna dress from By Hand London – if you haven’t heard of them already then you must be living under at least three rocks. If you have, then you’ll know their patterns are the latest craze amongst us stitchers, and with good reason. They’ve got a unique and refreshing style with an urban twist which you can dial up or down as you wish.

This is a wearable muslin  – I wanted to test the fit before I plunged my rotary cutter into some glorious fabric from Liberty which I’ve earmarked for a final Anna. In the end there was some adjustment – the inevitable gaping back had to be dealt with and I used Ginger Makes’ great tutorial for this as well as By Hand London’s tip (during the Anna Sewalong) for placing the top of the zipper in a few more centimetres in than normal when inserting. I still find the back a bit gapey though so I’ve taken more width out of the back bodice for the next version. I’ve also taken some length out of the v neck as I think there’s a bit too much in this version, using a similar method of slashing and overlapping.

I’m really tempted to try the boat neck version next time, along with the three quarter length sleeves as well as a full lining. If that all goes to plan and looks good then the Liberty fabric is up next! Here’s a sneaky peek of the Tana Lawn I’ve got…

See the dancing hipsters with the beards? Awesome yes? Love this fabric. It’s called Tiny Dancer which makes me hum Private Dancer by Tina Turner to myself every single time I look at it. You can’t beat fabric that makes you sing, eh?

In my previous post I mentioned I’d done some really STUPID things during the construction of this dress. These included, in no particular order, sewing facings the wrong way round, sewing dress panels the wrong way round, melting some of the fabric with an iron and having to patch it up with one of those little iron on patches and allowing a cat with a shitty bum to sit on the fabric. Tell me, what stupid things have you done recently in sewing? Can you beat the shitty bum scenario?

Oh yah – and I cut off all my hair! Apologies for the poor hairdressing skillz above but it is really very nice when I bother to do it properly. And it’s so refreshing not having to wrestle with long locks every morning, not to mention having little yoghurty hands pulling on my plaits. So nice to have a change.

You guys. This is so exciting! I’ve only gone and been featured in this month’s Making magazine. Go and buy it to see me. Or skulk in the newsagent, ease off the wrapper quietly and snigger at me on page 74 for nowt. Or check out this pic… 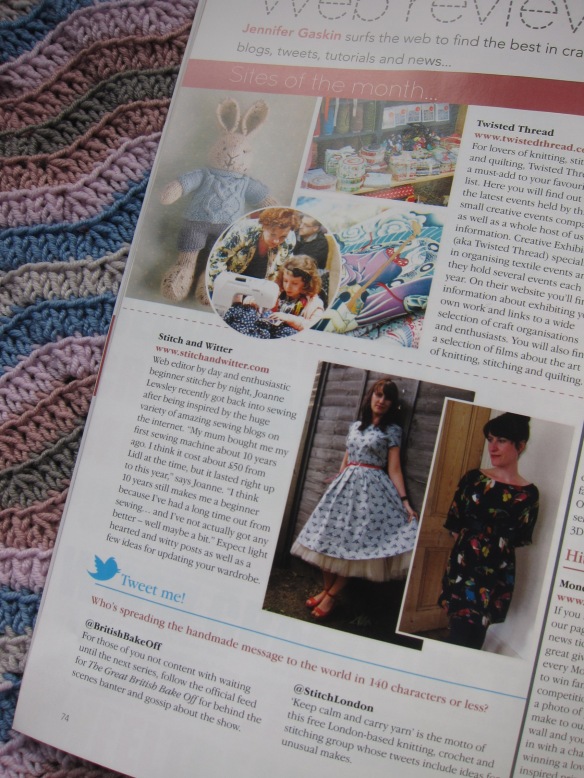 I did know that at some point I might be featured as they got in touch a while back for images but seeing it now in print makes me so darn happy. Silly isn’t it? But yay!

After all my complaining about ‘not getting enough time to, like, create and stuff yah’ it’s actually been a hive of activity around these parts in the last month. See that zig zag woolly item behind the mag in the pic above? That’s a top secret item I’m crocheting for my sister who is DUE in December. Yep – gonna be an aunty again. Love the fact that it’s not me this time and I can cuddle a little bundle and then hand it back before it explodes over me. I have my own exploding bundle thankyouverymuch.

I’ve also recently finished a gorgeous baby/toddler cardigan but got no photos alas and alack before I gifted it away. But with the mother’s permission I hope to share some pics soon, modelled by an impossibly gorgeous child.

And I’ve started my Anna dress! Well, a wearable muslin upon which I have already visited some shrieking errors. Seriously – yesterday I must have shouted ‘I’M A DICK!!! WHY AM I SUCH A DICK???’ about twenty times. The pattern is glorious – terribly simple. But dear readers… I also appear to have become terribly simple. But we’re nearly there – just waiting on the next instalment of the Anna sewalong to help me with the invisible zipper scariness.

AND I went to the Knitting and Stitching Show up at Ally Pally last weekend where I saw precisely NO bloggers. Where were you all? Last year I accidentally ran into two of the most illustrious and celebrated blogger beauties all in an hour. This year you were obviously all hiding from me. I went with my crochet teacher and friend Bridie who was elbowed, nearly knocked over and then run over by a shopping trolley, all by a series of grey-haired knitting assassins clutching decorative sampler catalogues from Brian on stall 41. Fucking scary my friends. After said show Bridie showed me round a pair of knitting needles because, deep breath, I’m going to try my hand at the Miette Cardigan. Seriously, why bother with socks when you can drive yourself demented with a cardigan huh? That little square below isn’t my version of the cardigan by the way. It’s a tension swatch. A TENSION SWATCH! What am I getting myself into….?